Learn the footwork drills, philosophies and terminology that players are taught in Spain.

Eight years spent traveling and studying tennis instructors in Spain has left Chris Lewit with a wealth of coaching knowledge that he's eager to share. In this video, the certified USTA High Performance Coach explains the philosophies and terminologies that Spanish coaches use to train the footwork of their tennis players. You'll also get drills used by Spanish coaches designed to create world-class tennis players. Once you've seen and heard how footwork is taught in Spain, you'll know why the country produces so many elite players!

Coach Lewit discusses the different terms and theories that he's learned from observing some of Spain's best tennis coaches. You'll learn about receiving and sending the ball, what the "support system" is, as well as how the Spanish train balance, footwork, agility and more!

In Spain, footwork is integrated while working on the rest of the body and is rarely isolated. Coach Lewit debunks the myth that Spanish teachings focus on the open stance. Instead, he explains that a closed stance is more common. Coach Lewit has learned that Spanish players are taught to "suffer," or in other words, run and try to hit every ball. Getting behind the ball (getting the body set up to hit) is stressed, making it crucial that players sprint to receive every shot.

Coach Lewit includes nine of the most common footwork drills that he's seen used by Spanish tennis coaches. Many of the drills force players to move all over the court, improving their conditioning while working on making solid contact with the ball. Being set for every shot and "suffering" in every drill will train your players to dig deep and play at their maximum level on the court.

Resistance belts are introduced for advanced players who have worked a lot on their movement and need an additional challenge. Coach Lewit warns against using bands that are too heavy for younger players, as they'll only hurt the athlete's ability to learn the proper technique. When used properly, these drills will improve the quickness, agility, reaction time and coordination of your players.

Coach Lewit's instruction is both clear and informative. If you or the athletes you coach are looking to improve your footwork and have it mirror some of the best Spanish players in the world, then this is the video for you. 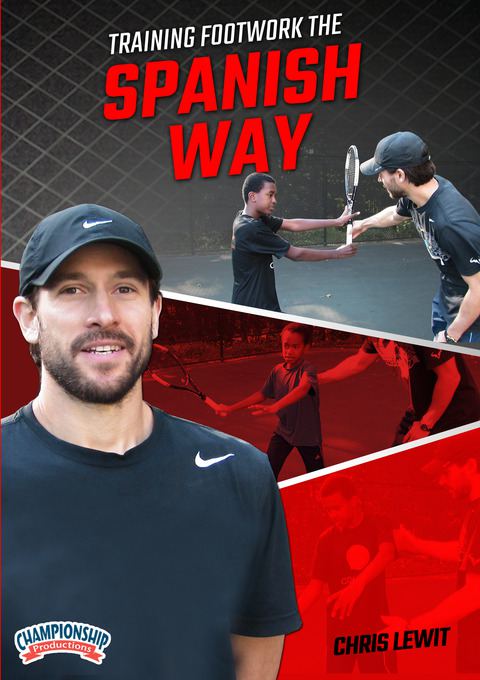